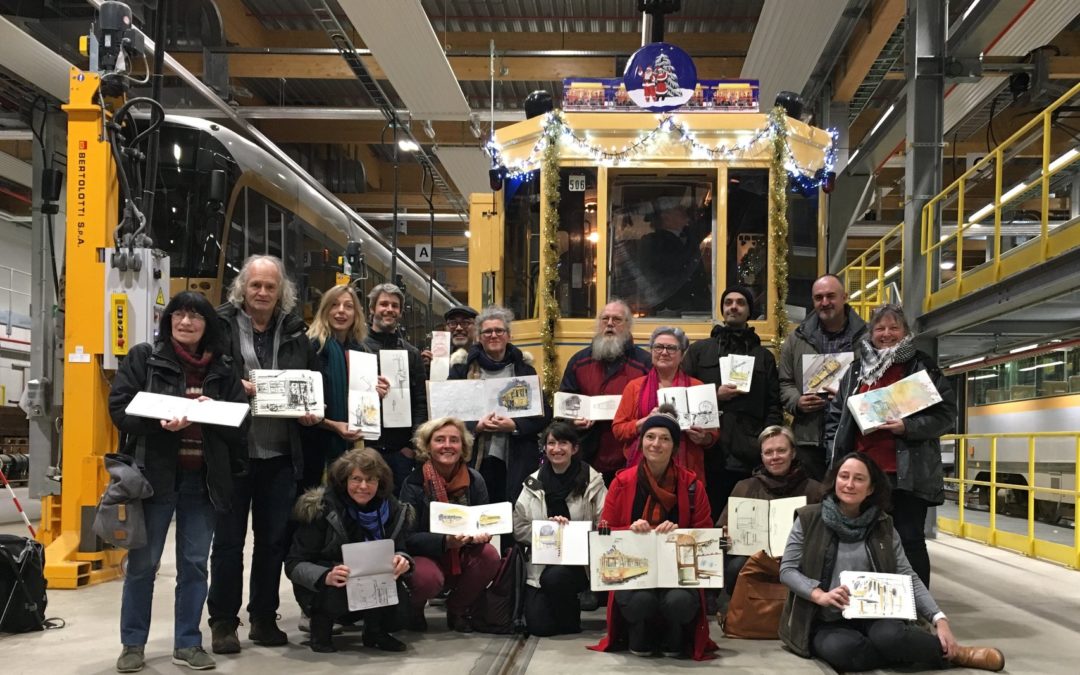 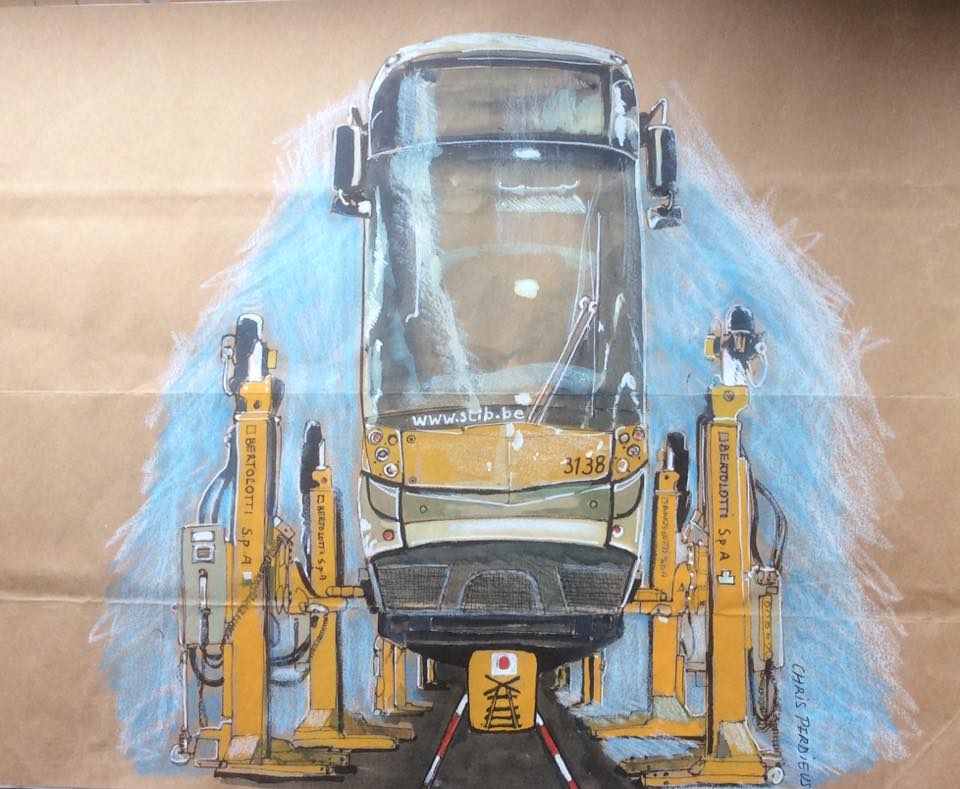 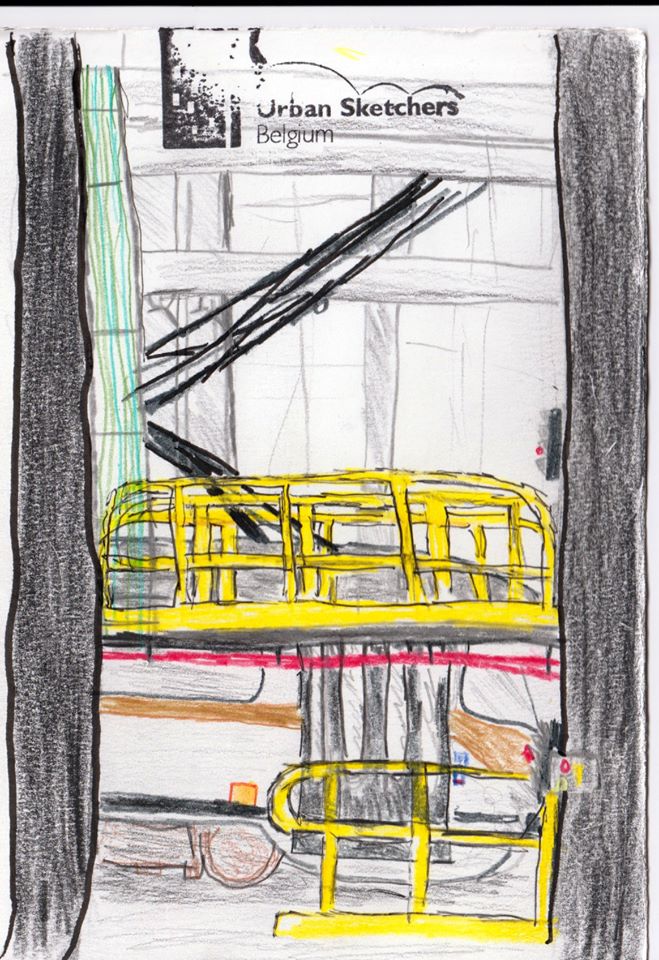 When we got the invitation, we had no clue what was going to happen. I have this policy of saying yes to things that seem fun. It’s a good policy, I recommend it.

Clueless of the details, I grabbed my sketch gear. I didn’t grab all of the pencils, just some. We were told to dress warm and to bring a light sketching set.

On a whim, I thought to bring my Naples yellow pencil with me. Correction, Derwint calls it Sicilian Yellow(. But really, it looks like a Naples Yellow.

I sharpened my pencils on the train, sketched some people on the train from Hasselt to Brussels.

(what’s an urban sketcher to do otherwise?)

Ten minutes late, I arrived at the first workstation.  I literally walked into the past. One of the eldest warehouses of the MIVB. I was blinded by all the yellow vests everyone was wearing.

A beautiful decorated tram stood proudly in the centre of the area. Giovanni was standing next to the tram. He was dressed to the T. Buttons shined. A beautiful hat. He posed for us for over an hour. Holding the same pose for over an hour is hard work. Thanks Giovanni, you were an incredibly good sport.

We were allowed to sketch this fairy-tale scene for an hour. While sketching, tram drivers trickled in after their work shift.  I got talking to one of them, he was curious, who were we, why where we there, where we students? So I replied nope, we do this for fun, we are part of this loose organisation called urban sketchers. All over Belgium we meet and go sketch. It’s a like mini-holiday. Turns out, he is an artist, who enjoys to create after hours. I kindly invited him to our next sketchcrawl. I didn’t catch your name, but if you, mivb-dude, are reading this, join the club next time.

So all of us were in good cheer, happy to have been able to sketch such a unique object. Much to our surprise we were invited into the tram. In the tram we were greeted by a good-natured man, offering drinks.  And then, the tram took off. We were treated with little snacks. Not only is the tram magically decorated on the outside, the inside has Christmas music and Christmas decorations. Made entirely of wood. It was a funny sight, us in our yellow safety vests, celebrating.

A couple of laughs and good conversations later, we arrived on the next location. We arrived in the 21st century, in a sparkly clean warehouse, filled with the newest trams. It was like a movie set.  We time traveled from the early days of public transport right into the future. That future also held drinks and a fine selection of little snacks.

Since we were limited in time, we got sketching. The lovely waiter served us. He found us underneath trams, on staircases, the man was very committed. Once time was up, we received a goodybag, with sketchbooks and limited edition mobibcards. Gratefully we were allowed back into the old tram, homewards. The tram dropped us off right in front of Brussels south. On my way home I was still buzzing with gratitude. This was the best Christmas gift I could have received. Thank you Florence and MIVB for having us over for your yearly invite.

Due to safety reasons, only a limited amount of sketchers were allowed on this event. It was impossible to fit more people into that little wooden tram. But I do hope to see you next time one of our sketch crawls. 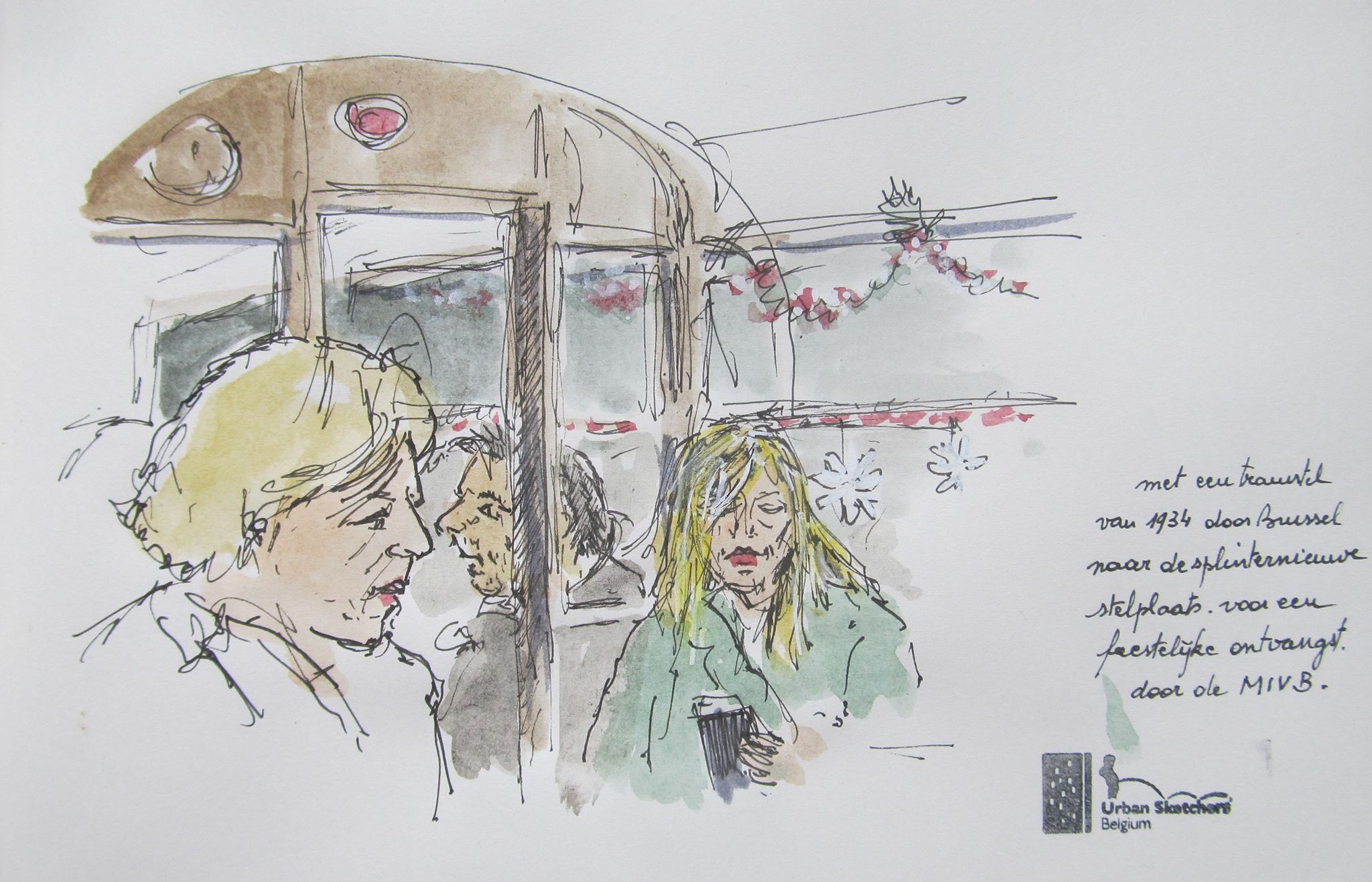 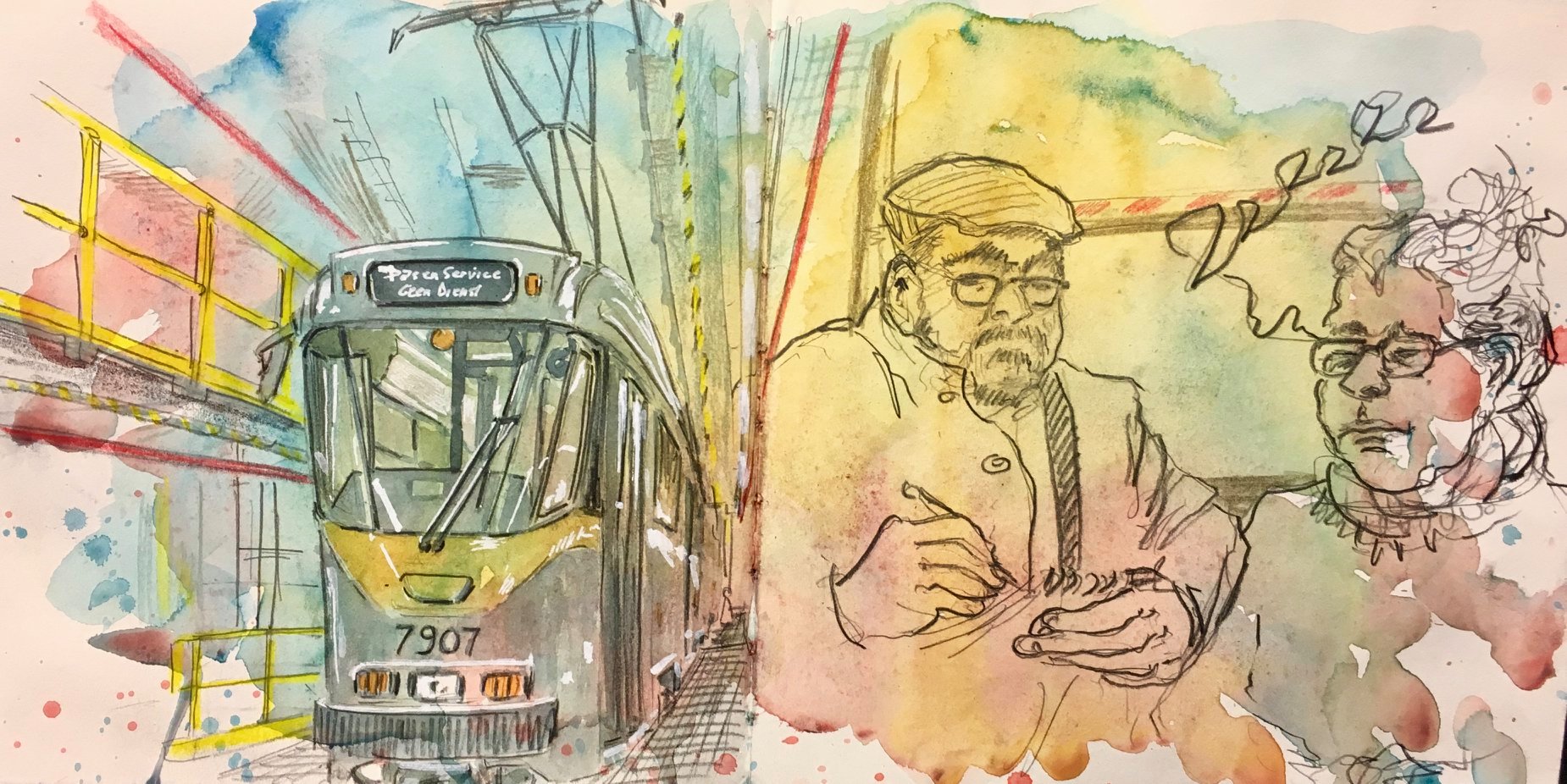 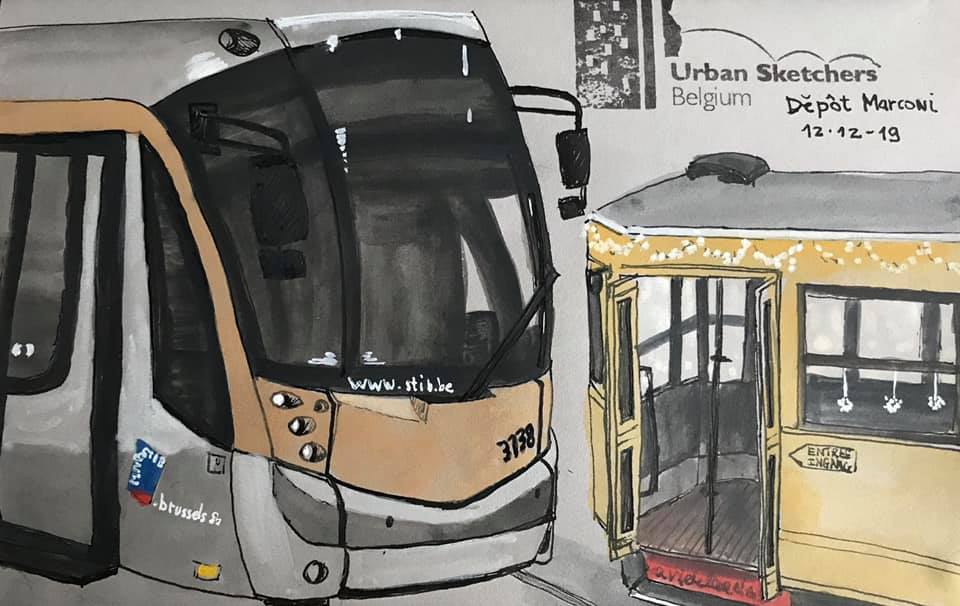 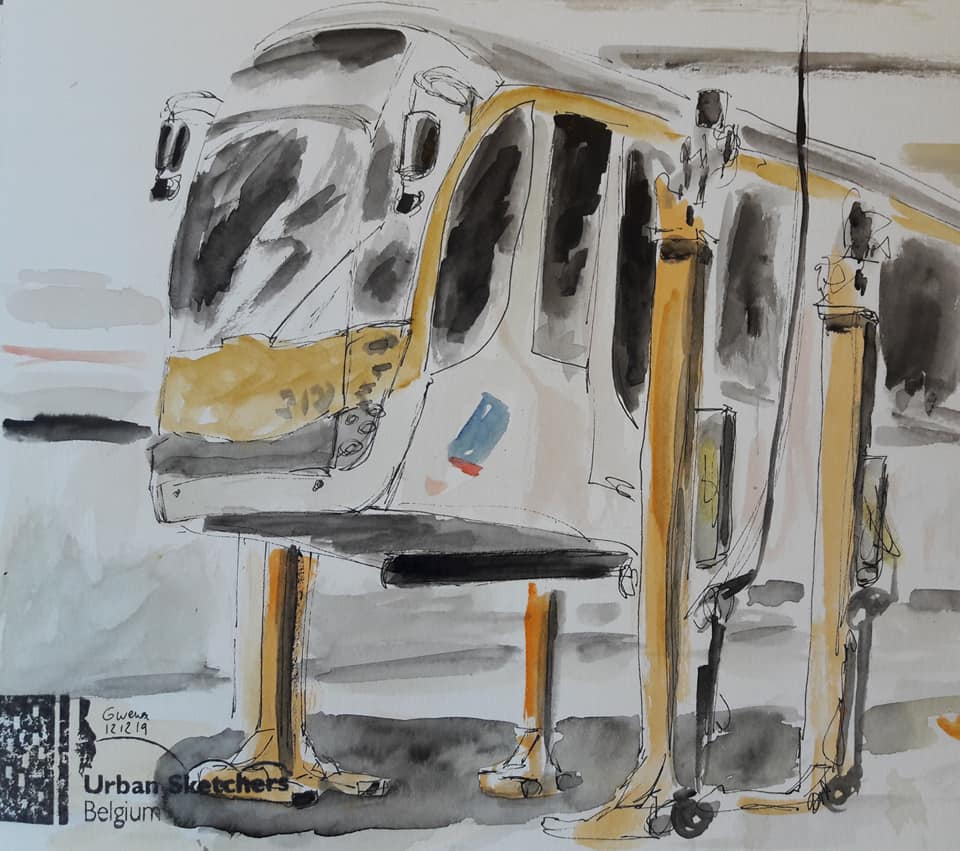 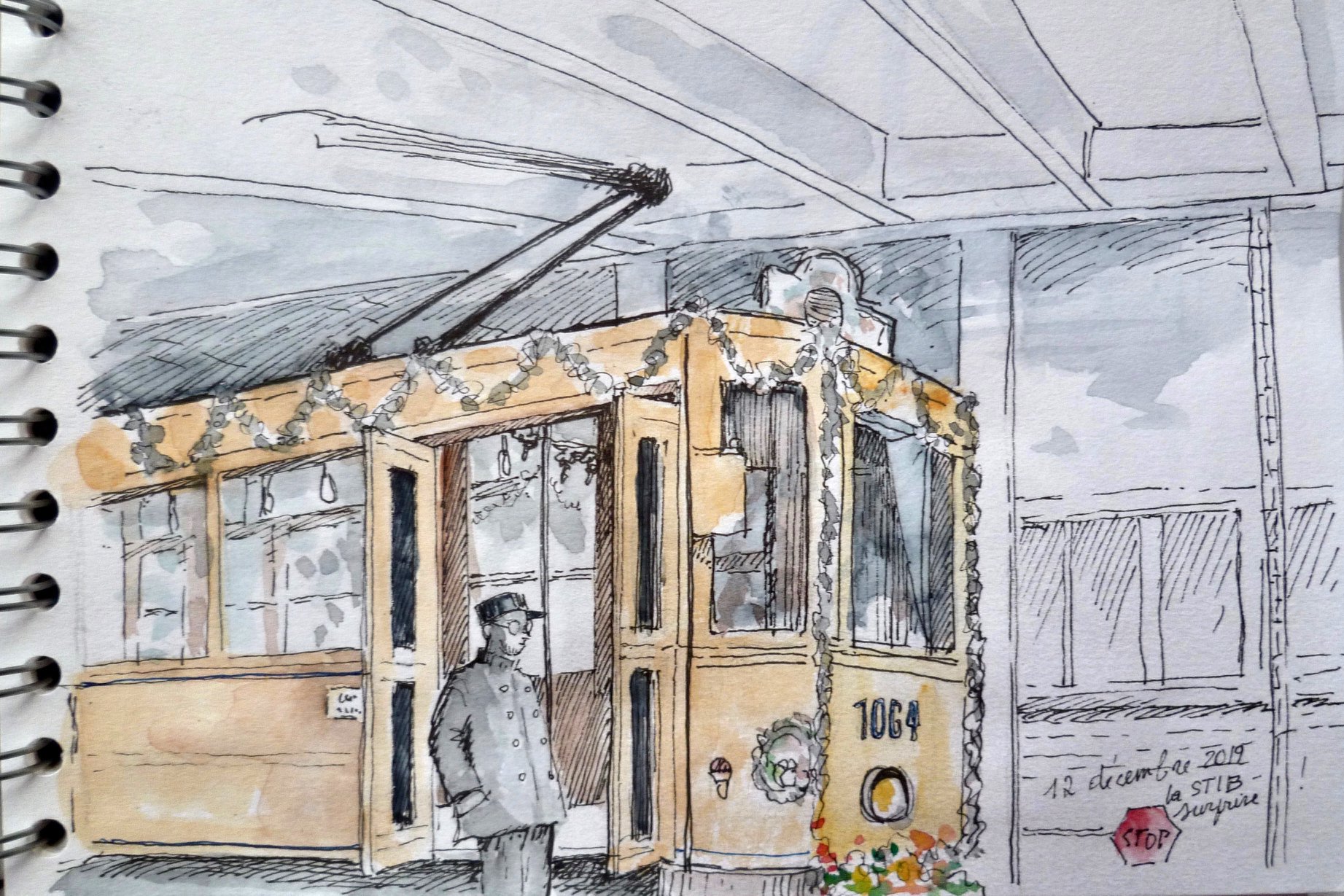 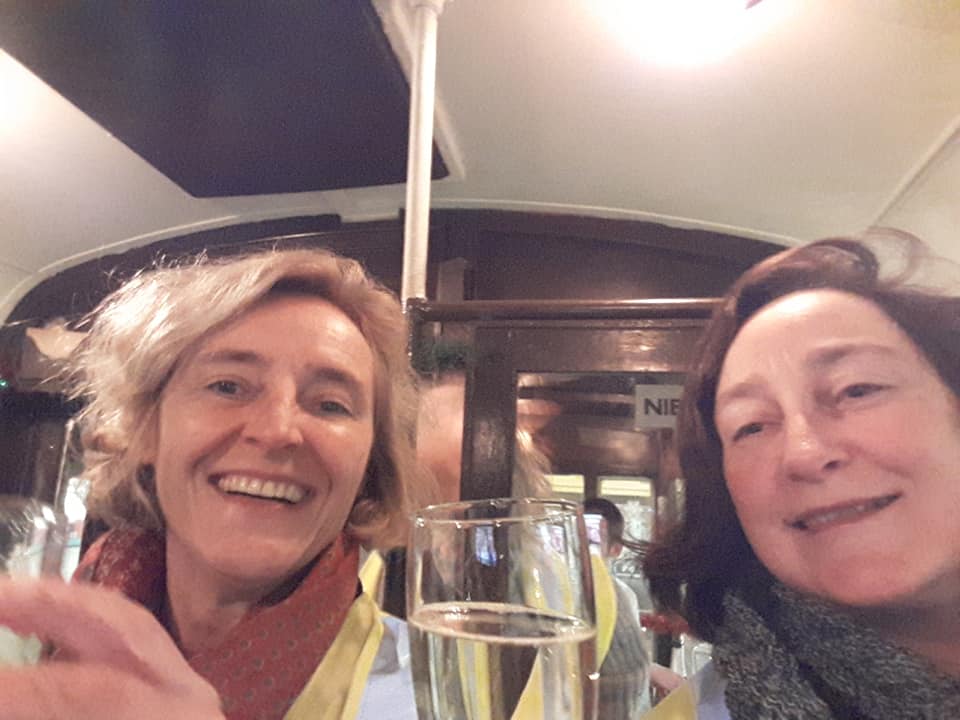 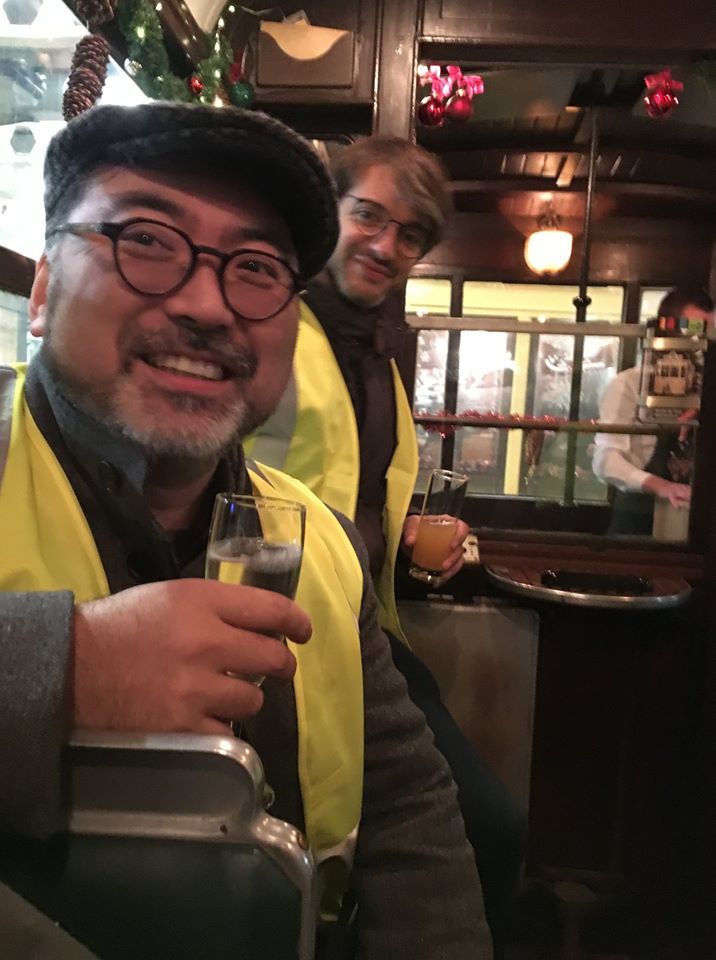 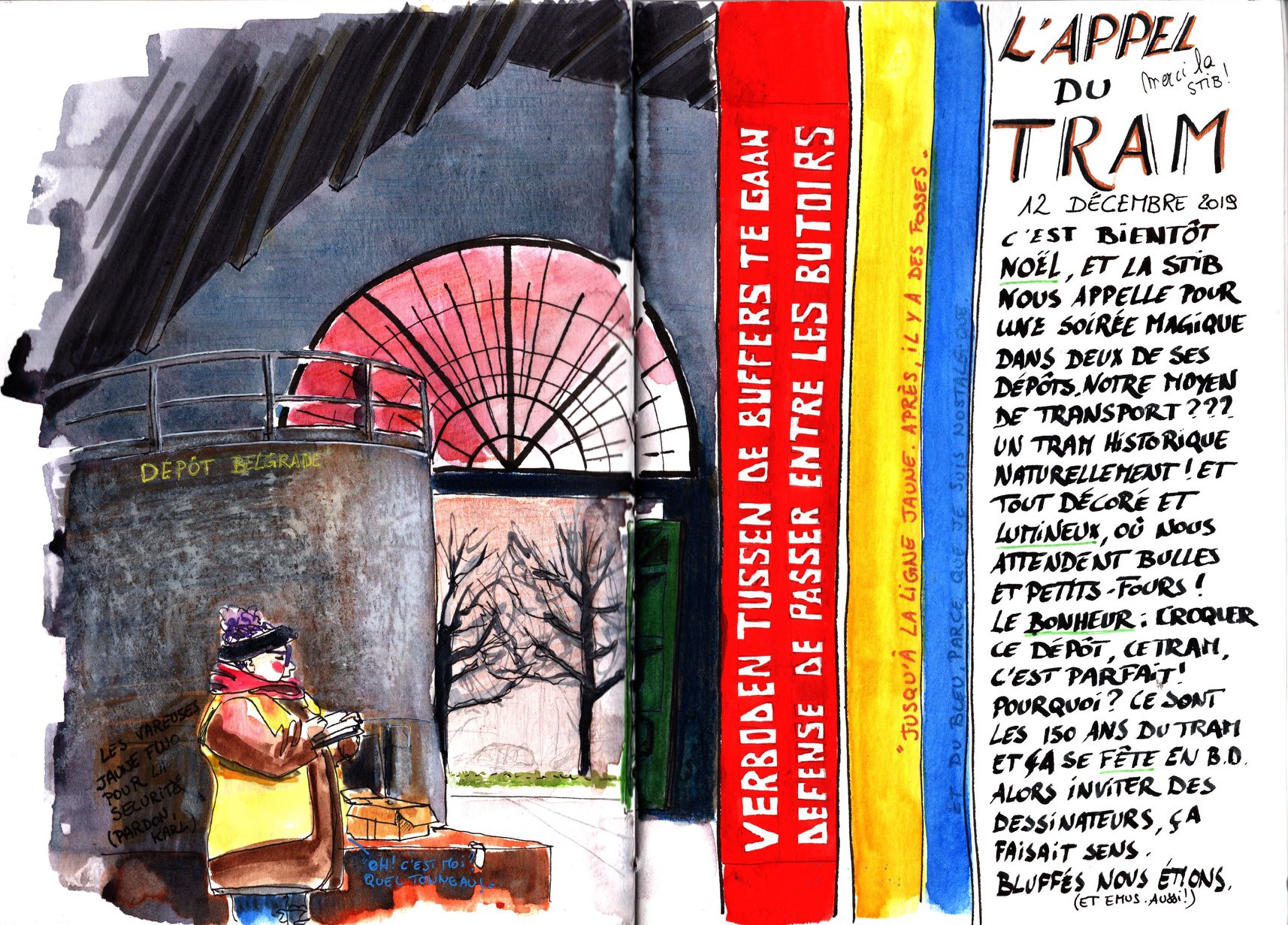 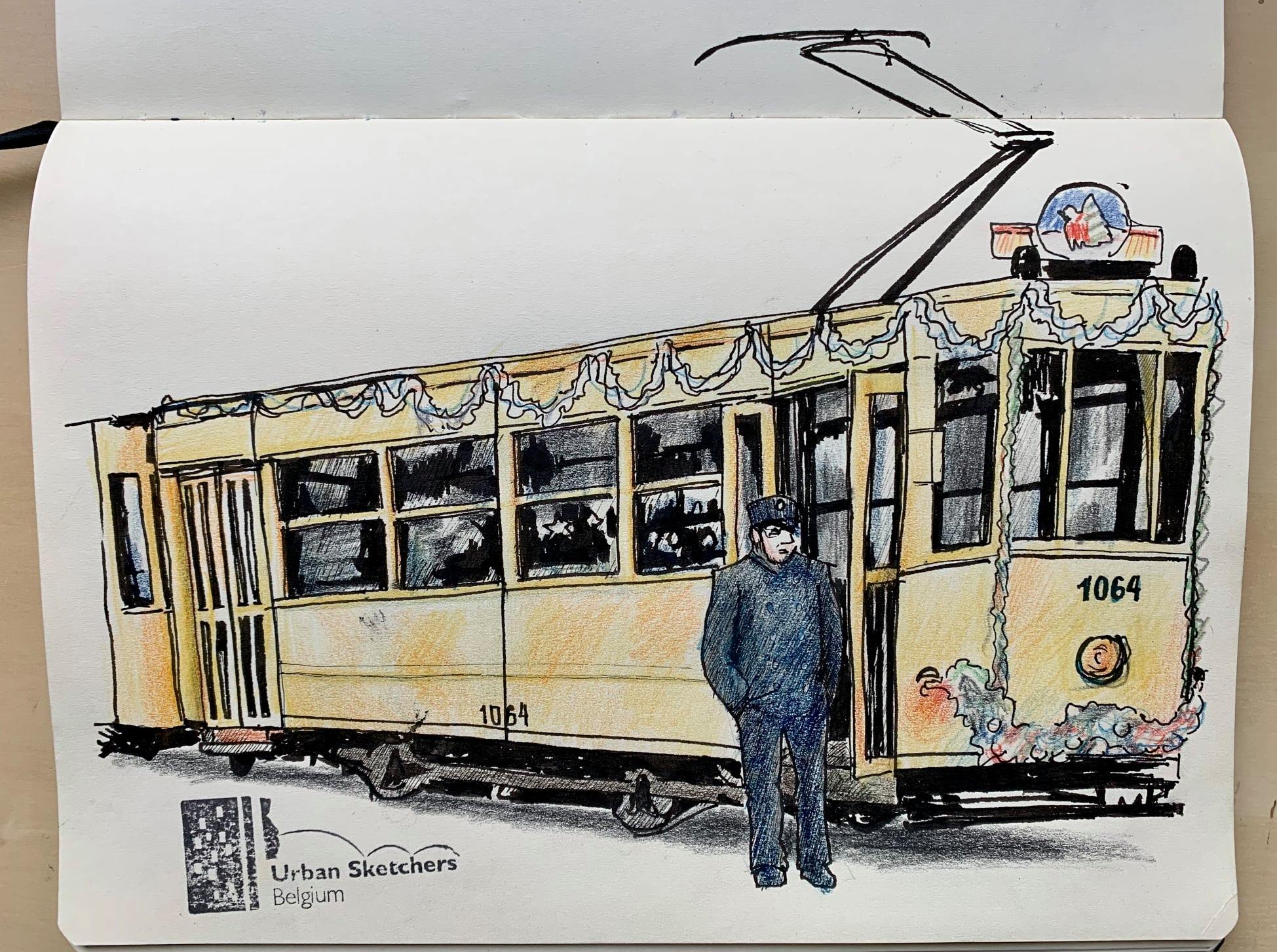 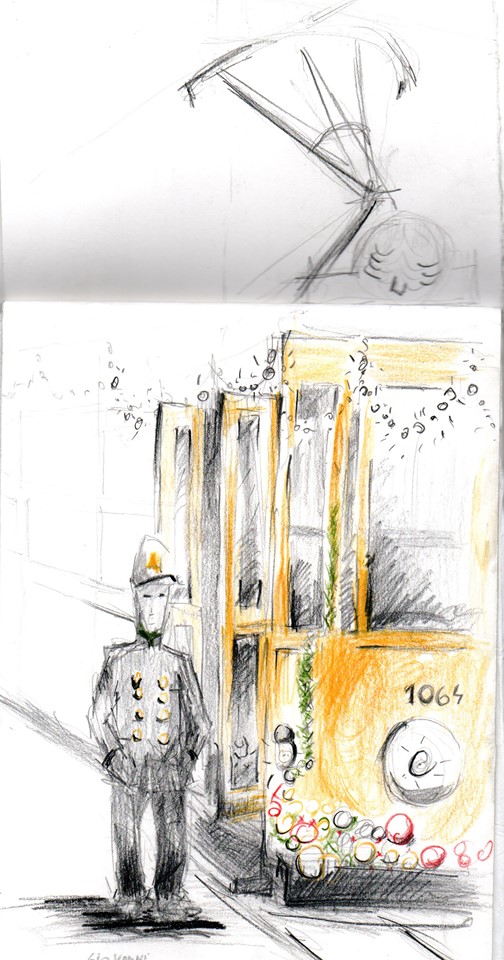 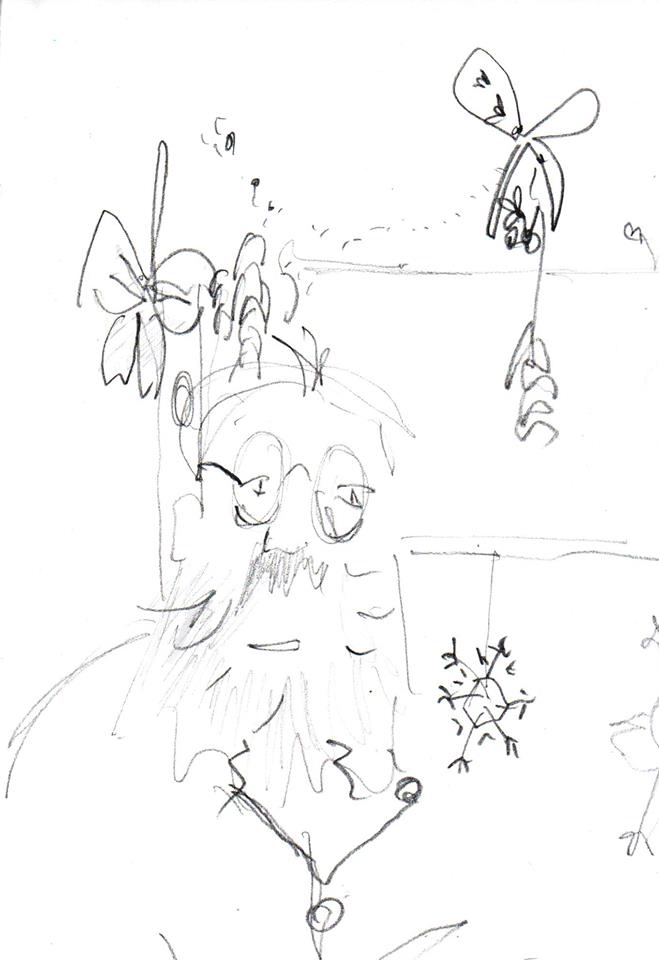 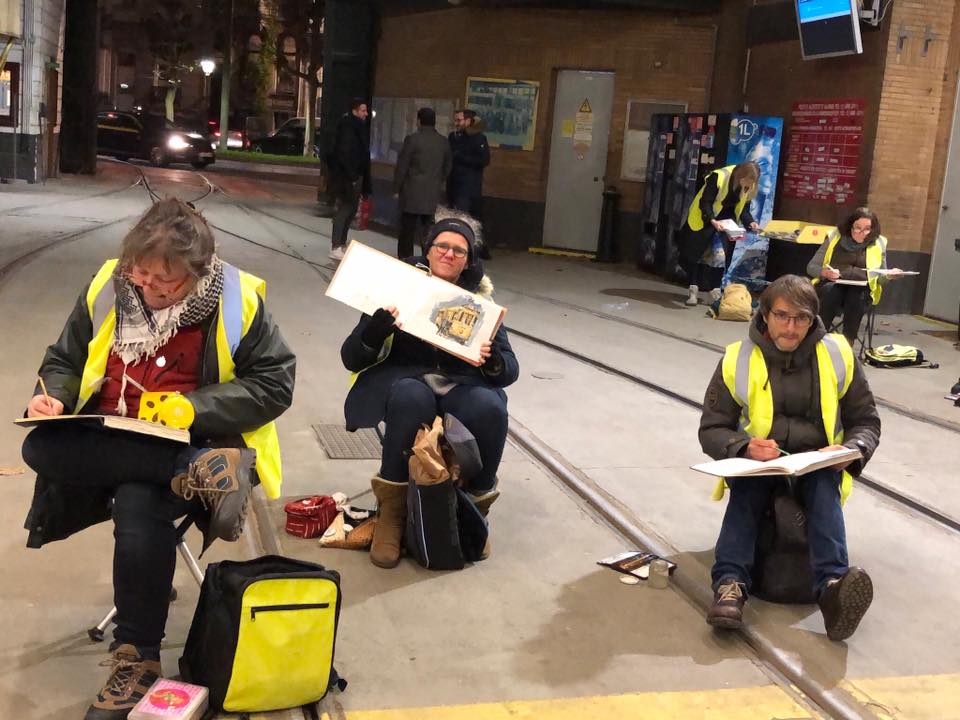 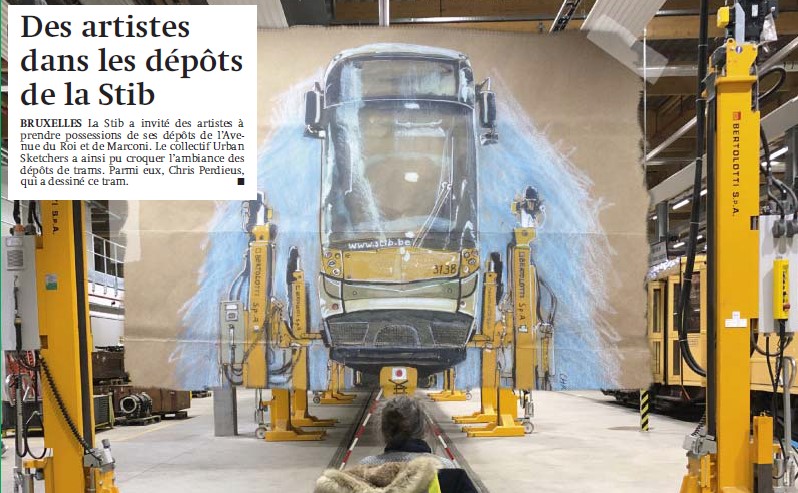 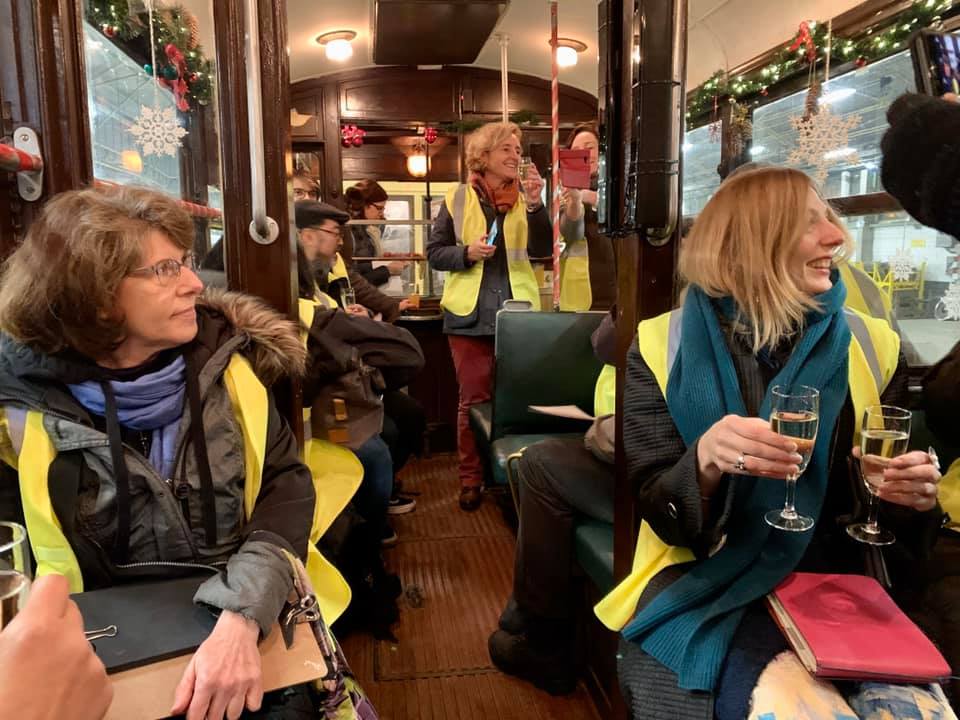 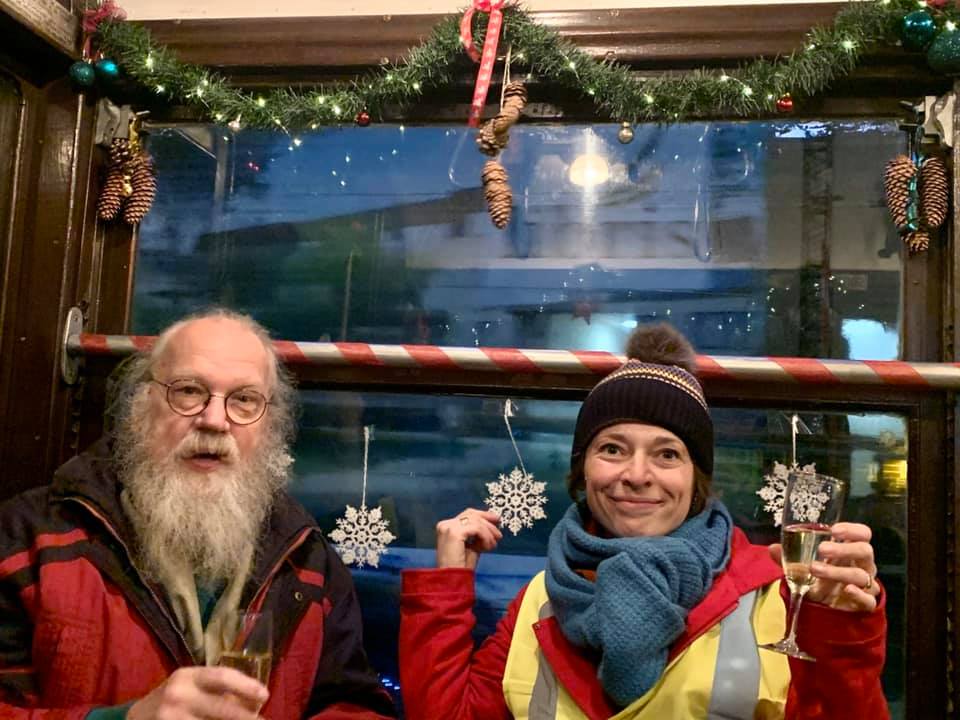 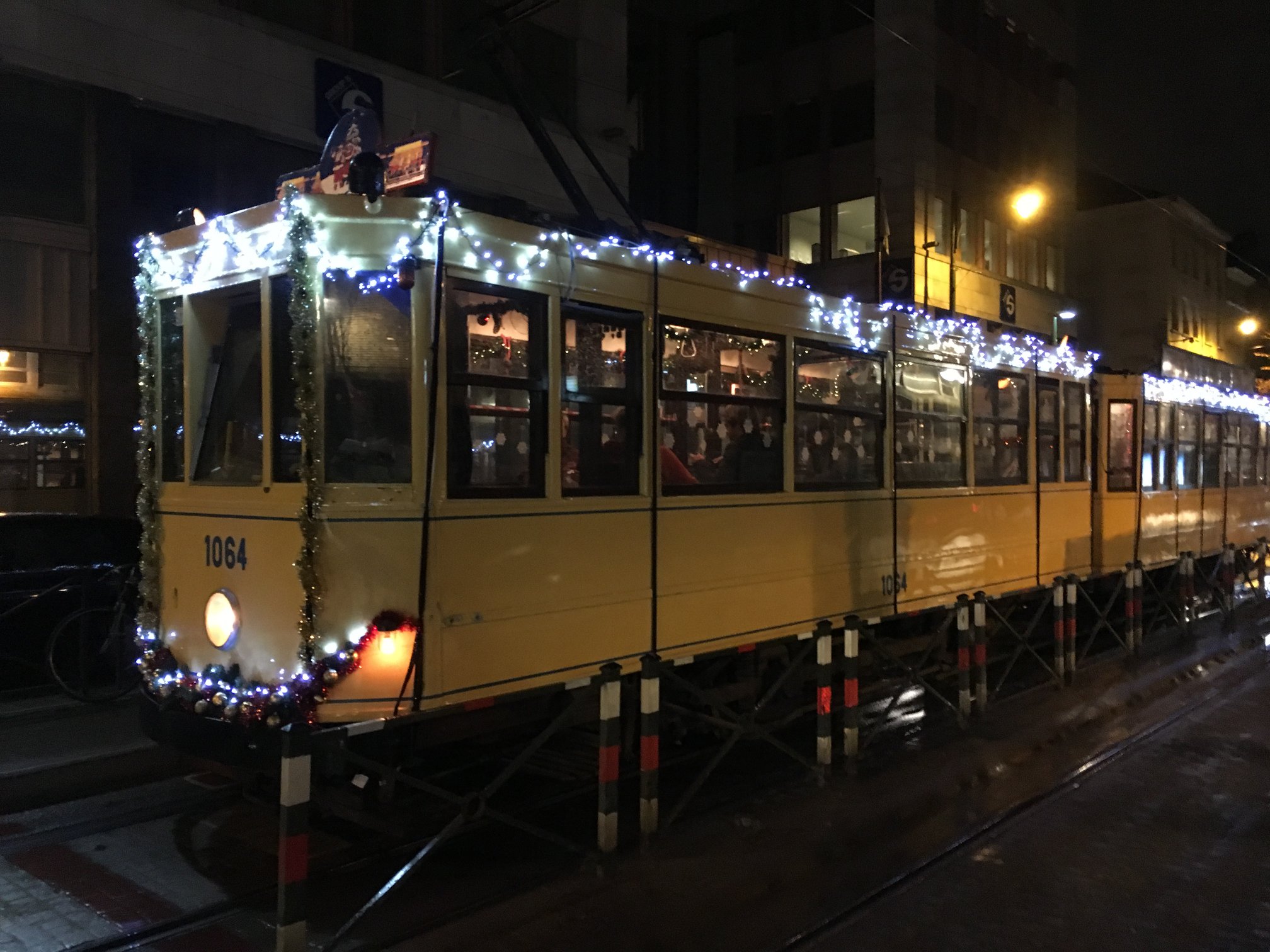